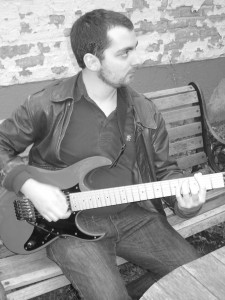 Nick Mizock was born in Chicago, Illinois and began playing guitar at the age of 11.  By the age of 18 he had already played professionally at Chicago Symphony Center and was a serious performer of rock, jazz, and classical guitar.  In 2004, he became the first guitarist to double major in classical and jazz guitar at Northern Illinois University where he studied with guitarist Fareed Haque (Sting, Dave Holland, Paquito D’Rivera).  While performing in the Northern Illinois University latin jazz ensemble he shared the stage with the Saturday Night Live Band’s percussionist, Valerie Naranjo.

After graduation Nick was accepted into the classical guitar master’s degree programs at New England Conservatory and Mannes School of Music but chose instead to work and develop his skills as a professional musician in Chicago.  There he led his own bands Zock and the Zock Organ Trio, performed with the band Magnetic, and played countless performances at some of Chicago’s best rock clubs including the Double Door and Lincoln Hall.  Additionally, he averaged a little over 100 gigs a year, playing weekly at Potbelly Sandwiches, with the Connexion Wedding Orchestra, and freelancing as a solo guitarist and sideman.  Nick released Zock’s debut album in 2015 and in 2016 was featured on Magnetic’s debut EP, both receiving positive acclaim.

In 2017 Nick relocated to Los Angeles to pursue his master’s degree in studio guitar at the University of Southern California.  There he studied with Grammy-winning classical guitarists Scott Tennant, William Kanengiser and Grammy-nominated guitarist Paul Jackson Jr. (Michael Jackson, Whitney Houston).  He received his Master’s Degree in Music Performance from USC in 2019 and returned to Chicago.  His future plans are to release the Zock Organ Trio’s debut album and an album of Frank Zappa’s music arranged for classical guitar.  Nick has performed at the Savannah and Chicago jazz festivals, and just about every major hotel in the Chicagoland area.

Nick has been an instructor of private guitar lessons since 2007, and since then has expanded to teaching bass, drums, saxophones (alto and tenor), mandolin, banjo, lap steel, piano/keyboards, and voice.  He has worked for the School of Rock since 2011 has directed and assistant directed shows steadily since 2013.  Nick’s teaching philosophy centers around helping students develop a great rhythmic feel above all other concepts.